All the senior teams train together as one squad; from the Colts who have recently started playing men’s rugby to the Club stalwarts who have been part of the WRUFC furniture for many a year.

With a squad of around 100 players and a team of dedicated and experienced coaches, you may be surprised to learn that the evening training sessions have been known to draw a crowd of spectators. Committed to each other and to their club, this senior men’s squad is one of the many jewels in the WRUFC crown.

Our Colts enjoyed their 1st road trip of the season with a visit to East London to play Eton Manor.  The teams met last season with Woodbridge narrowly winning 20:11 in the National Cup., but our opponents enjoyed the hospitality so much they insisted on inviting us to their gaff.  Brave.

I had to referee the match and fixed it that we won, not consciously.  I just want to congratulate you on a marvellous bunch of lads that play rugby for Woodbridge Colts.  They played in the true spirit of the game and despite the very dodgy reffing, especially at the end, you certainly showed Eton Manor how to play.  Despite the result from your point of view, this day went really well and we are obviously well matched teams with similar approaches to youth rugby, and we would love to continue this rivalry with another trip to Suffolk.  All the best to you and your lads for the rest of the season.

ECC Plate 1st Round:  Crusaders 19:47 Woodbridge Colts B
Thanks to Jonathan Brooks for this Match Report: –


An excellent result away in Norfolk against a strong Crusaders team.  Sam Wainer (captain) opened after sustained 10 mins opening pressure before 2 fine efforts from Haydn Sykes before Half time giving a 19:12 at the break.  Scores in 2nd half from Ben, Tom, and 2 more from Haydn ensured the victory.  A great team performance with controlled possession and accuracy, a solid defence was required throughout as Crusaders constantly threatened to get back into it.  Some great kicking from Charlie Eaton who slotted in 6 from 7 conversions.

Forward and Back of the day went to Haydn and Adam Hateley (Adam playing his 1st game at full-back this season).  A special mention to the U16’s who were given the opportunity to experience Colts rugby, to both assist with their development and involved with the larger squad. well.

A big thank you to the coaching team – splitting the team over 2 venues is not ideal, but new to us all.  And finally a massive thanks to our 1st aid team as always ~ Kerri and Vicki at home, and a big respect to Tracey Hateley for travelling up to Crusaders

ECC Cup 1st Round: Woodbridge Colts 17:17 Wymondham Colts A
Thanks to Jonathan Brooks for this Match Report: –

A scrappy 1st half from us saw us trailing 10 nil at the break, and our opponents definitely buzzing having weathered a strong push from Woodbridge in the early stages.  The 2nd half was however much improved with both the forwards and backs having much more possession pulling back the deficit with 2 try’s from Gabe Hawley, both successfully converted from captain Austin James, and a late penalty to see us lead 17:10 with 10 minutes to spare.  Credit to Wymondham who put us on the back foot before finally scoring a converted try under the posts and bringing us all square at 17:17

Although lots of disappointment and frustration at the end; we would of taken a 17:17 draw against the reigning ECC Cup holders having been down by 10 at the break.  Forward and Back of the day went to Gabe Hawley and Leo Brooks, but it was a great team effort and pleasing start to the cup campaign.

A great shift from the boys yesterday in the Saffron Walden mud fest.  Although losing narrowly 5 : 0, our Colts generally had the better of the possession throughout but were unable to break through the resolute SW defence.   With just 17 available, many playing out of position, we were not quite able to force the ball over the line on what was a very soft and chewy pitch.  With one held up, and a late push from the forwards spilling forward at the 10th attempt, it just wasn’t meant to be.

Carl Wainer was man of the match, who stepped in to help the forwards, and was resolute throughout the game.  DOTD went to captain Dan Driver, for turning up with just 1 boot!  Special shout out to Sam Gardiner, making his debut on the wing, our newest recruit to the Colts.

Some scruffy rugby but a great match to watch, and a big thank you to our hosts for making us so welcome.


A disappointing end to 2019 with the Colts losing 22:14 to a much improved Sudbury XV.  Woodbridge generally had the better of their opponents yesterday but our hosts defended resolutely and executed perfectly when given the opportunity.    We were dominant in the scrum winning all 15 of ours while also taking 4 of theirs, but game management should of been better, and we could have been more clinical / fortunate in the final 22.  Generally more positives than negatives and a good run out before the festive break, so no complaints.

Forward of the day went to Kai Mangar for some great leg drives in the 2nd half (but also DOTD for his choice of kit!!).  Back of the Day went to Elliott Baskett for some great foraging runs down the left hand side.

On the other pitch, Woodbridge Colts were being represented by Max Irwin and Gabe Newland who both featured in the EC Colts 35:0 demolition of favourites Middlesex.  Many congratulations to you both, a tidy win

Finally, well done to Austin James who featured for the 1st XV in a narrow 10:5 defeat at Beccles, to Leo Brooks who scored his 1st try for the 2nd XV on his way to joint MOTM with Charlie Fulcher, and also a mention to Will “Frohny” Frohn, another ex-Colt, finding his feet in adult rugby helping the 2nds to a comfortable 52:19 win at Harwich.

Have a great festive season everyone.  We are back training on Thursday 2nd January ahead of our 3 week Essex festival beginning with Braintree who visit us at the Barn on the 5th.

Final round of the Eastern Counties Merit League 8/12/19

Report: Jonathan Brooks. A strange and slightly subdued day on Sunday saw a small handful of Woodbridge Colts travel up to Ely for the final round of the Eastern Counties Merit League. Injury, commitments and a serious bout of travel shyness, meant just 10 Colts made the journey down the A14 in the blustery conditions to take on Ely and Saffron Walden.

Borrowing 3 forwards and a winger from Saffron Walden, the #Warriors picked apart the Ely defence in the gusty conditions and earned a well-deserved 24:0 victory against the hosts. In the 2nd game, with just 8 walking Warriors left on the pitch aided by the now tiring Ely support players, it was the fresher legs of Saffron Walden who used their superiority and intelligent line running to run in comfortable 27:0 winners against the now depleted Woodbridge/Ely barbarian 13.

MOTM went jointly to Ash May and Tom Rankin who stayed on for a 3rd game to return the favour and help Ely against SW. Great effort and commitment. A massive thank you to both Ely and Saffron Walden for being such great sports, and particularly to the players who filled in gaps.

A disappointing turnout but the boys stood strong and the teams commitment to always “Go with what we’ve got” earned them lots of friends and respect.

On Friday evening was the annual Club vs School fixture which took place under the floodlights.  A highly competitive game where both teams put everything on the line in the search of a win.  The school started strongly and etched out a 14:0 lead before the Colts slowly clawed it back to claim a well-earned 17:17 draw and an even share of the spoils.  With it however came a lot of ill-discipline with cards, language, and respect all needing to be addressed separately.

Off the field however, an estimated crowd of 250+ ensured the Clubhouse tills were busy and all rivalries put aside.  In addition to bar and kitchen takings, £225 was raised in the raffle to go towards the Tractor Fund.  A huge thanks to Laurence for refereeing, to the kitchen and bar staff, and to all those who helped on the night. 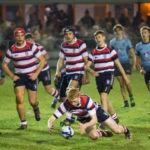 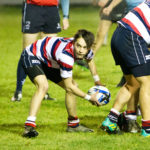 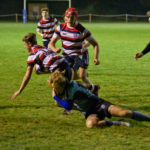 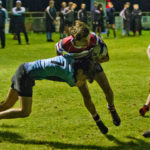 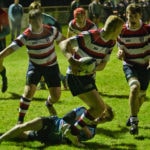 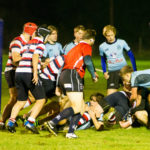 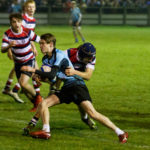 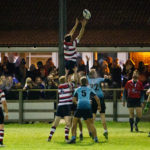 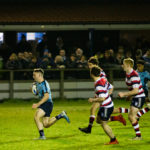 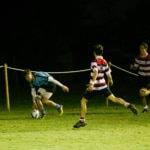 Woodbridge Colts 39 Southwold Colts 5 EC Cup
Southwold RFC Colts arrived several players short to play Woodbridge Colts but eventually 15 faced 15 for an exciting match that didn’t reflect the scoreline. Woodbridge Colts’ Marcus McMyn scored four trys joined by James Owens, Reef Edwards and Charlie Mayhew who got one a piece. Rene Ball scored early in the second half for Southwold. Some first class performances on both sides kept Colts Rugby the fast-paced spectacle it is – as exhausting to watch as it must be to play! 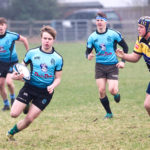 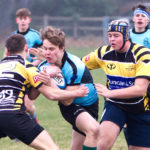 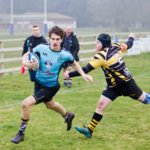 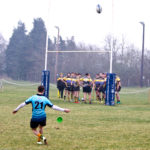 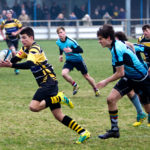 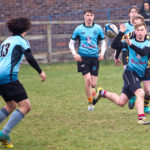 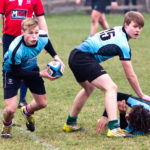 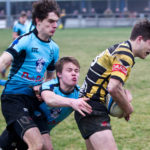 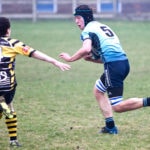 Report from Duncan Andrews: Patently not our finest hour. Wholesale changes in the pack saw a light weight eight under the cosh and unable to offer go-forward ball for the backs. Southwold drove us off the first few scrums which set the tone and were more committed at the breakdown all afternoon. We took a lead against the run of play when Toby hit a gap at speed but a succession of quickly taken penalties saw Wold draw level. 7-7 at the break and with the elements behind us, all to play for…

Instead it was Southwold that took the game by the scruff of the neck, scoring from the restart which we failed to catch, then backing this up to take a 7-21 lead. Woodbridge hit back with Archie kicking through to score but fittingly Wold finished on top, first kicking a penalty and then adding a try on the whistle. We will regroup with the lessons from today.

A hard fought, but well deserved victory in front of the brand new (and very impressive) Wymondham RFC clubhouse.   No more need to choose the deep end or the shallow end at kick-off!!
A big thank you to our hosts and we wish them well for the rest of the season
It’s a home tie next against Ealing Trailfinders in round 2 on Sunday 18th November 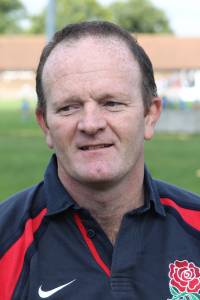 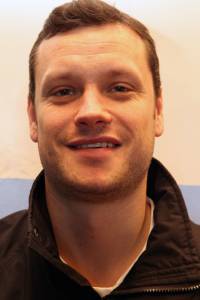