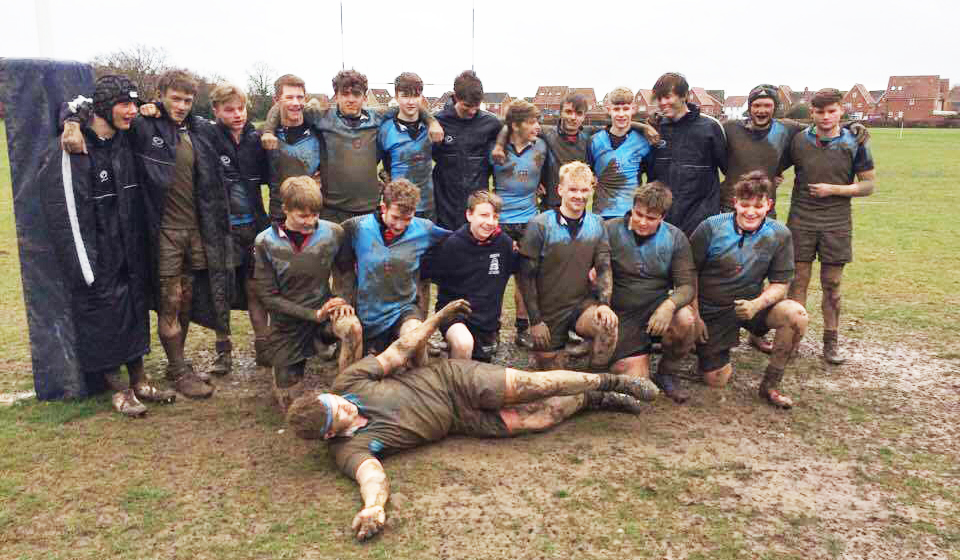 The tone was set the first time Colchester’s outstanding captain ran the ball at us, only to be double-tackled and driven 10 meters backwards. Playing into a strong wind, Woodbridge mauled, sprinted and slogged our way up field through the mud, determined to protect possession and so deny Colchester point scoring opportunities. The next time Colchester ran at us, a series of thumping tackles eventually forced the turnover, only to see two of our players leave the field with shoulder injuries. But with replacements as committed as our starters, the score remained just 3:0 until the last play of the first half – when Colchester turned our 22 drop-out into a try in the corner. Turning around we needed 9 points for the win, which looked very achievable.

But with the wind dying and the pitch degenerating into a mud bath, even kicking for the posts became near impossible. The intensity never dropped, nor the inventive rugby. Four times we threatened their line only to leave empty handed, including one maul that was held up in the in-goal area. So all credit to Colchester, who earned their title by keeping a clean sheet under such sustained pressure. And no complaints or regrets about an outstanding game of rugby between two excellent teams who gave absolutely everything. Inspirationally led by our match captain Tom Jermy and vice-captain Alex Wakeling, many of Woodbridge’s 21 man match squad will have come away knowing that they played the game of their lives – so far.

Posted on 6th March 2017 by Simon Ballard — No Comments