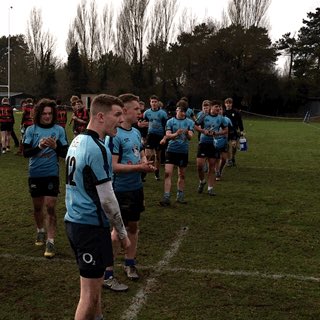 A scrappy 1st half from us saw us trailing 10 nil at the break, and our opponents definitely buzzing having weathered a strong push from Woodbridge in the early stages.  The 2nd half was however much improved with both the forwards and backs having much more possession pulling back the deficit with 2 try’s from Gabe Hawley, both successfully converted from captain Austin James, and a late penalty to see us lead 17:10 with 10 minutes to spare.  Credit to Wymondham who put us on the back foot before finally scoring a converted try under the posts and bringing us all square at 17:17

Although lots of disappointment and frustration at the end; we would of taken a 17:17 draw against the reigning ECC Cup holders having been down by 10 at the break.  Forward and Back of the day went to Gabe Hawley and Leo Brooks, but it was a great team effort and pleasing start to the cup campaign. Thanks to Jonathan Brooks for this Match Report: –

Posted on 27th January 2020 by Simon Ballard — No Comments