Thanks to Darren ‘Reg’ Perry for report & pictures

Woodbridge Saxons travelled to Mistley with unfinished business from last season. Saxons bench ensured Mistley had a full team, as only able to field 13 players. Mistley showed their hand too early with their forwards scoring in the first few minutes, this was also converted. This was their main mistake of the game, as this score woke the sleeping beast with in the Saxons, who set about dismantlng a spirited Mistley side. At half time the score was 7-40. A stern chat from Jez saw the Saxon run in two tries straight from the restarts. Mistleys second try was well worked and well deserved for their effort through out the match. The final whistle saw the score 14-99. Backs and forwards combined well today, seeming to take it in turns to score. A big shout out to Mistley, who continued to battle throughout until the final whistle was blown. 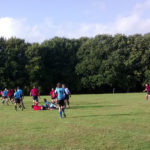 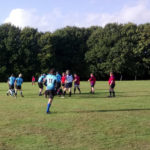 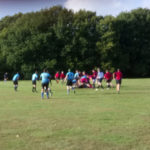 Posted on 22nd October 2017 by Simon Ballard — No Comments