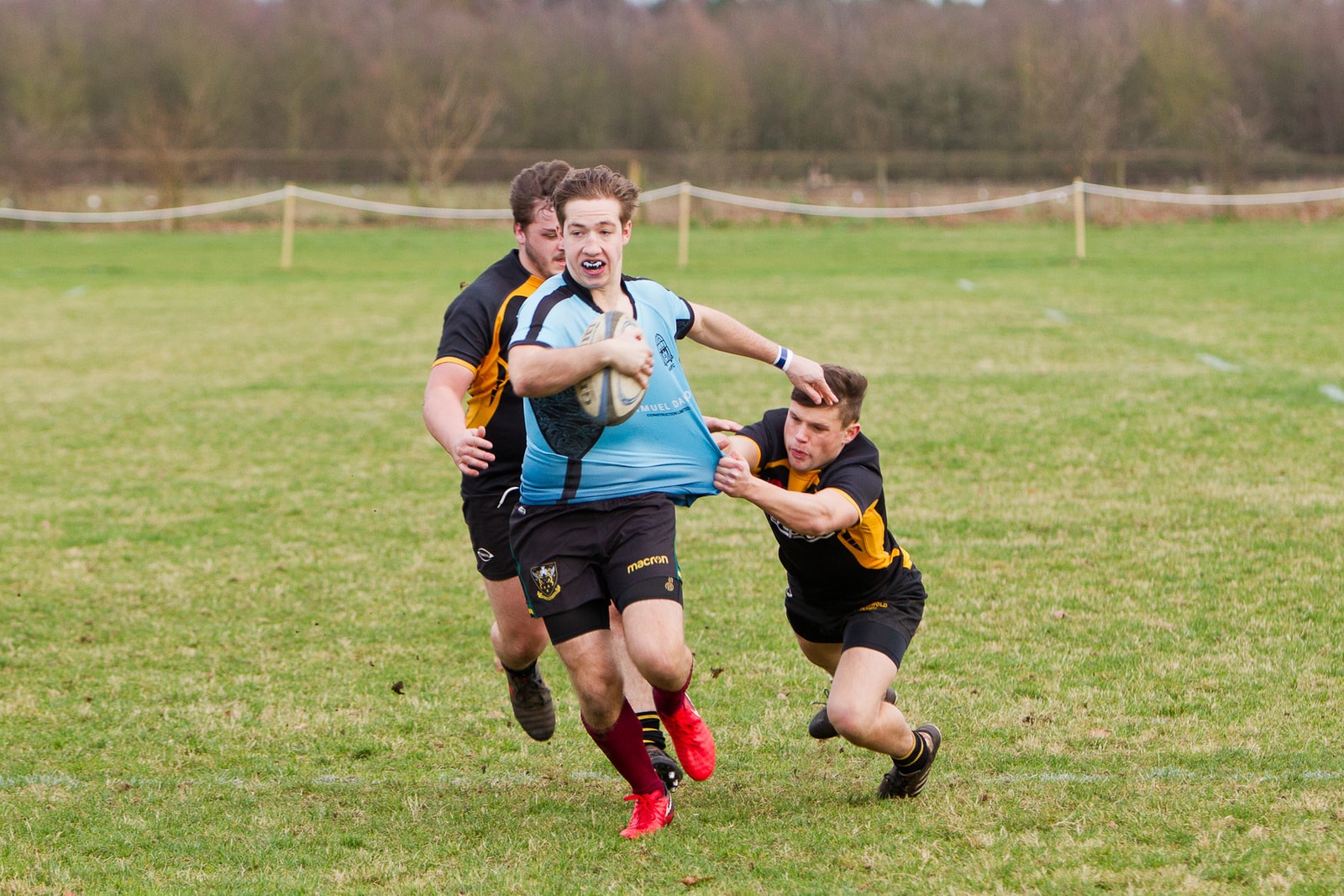 This annual U21 fixture has been running for approximately 5 years, with this game being the first to be played at Southwold RFC. The aim of this fixture is to bring back ex Colts, students and those who work away to form a team to represent the club at this level. Those that are nearing the upper age limit were predominately Duncan’s team that he coached from U7. In his words we would be putting the band back together for one last time.

The game was to be played on the smaller pitch at Southwold due to the first team pitch being waterlogged?? The sun was out but it had little effect due to the light sea breeze, a force 5 gale with not an ice cream van in sight.

Woodbridge won the toss and decided to play up the slope with the wind at their backs. Southwold started the better and it was evident that the pick and drive game was to be their weapon of mass destruction. Phase after phase Wold threw numbers into the break down to secure the ball but were only making marginal gains. Against the run of play and from a dominant scrum Simon Plummer broke right,  fixing the defenders to then release Marcus McMyn to outpace the covering defence to score in the corner. Conversion missed 0-5.

The score seemed to settle Bridge who began to dominate the scrums & territory but possession was still even. Wold continued to stick with their game plan but struggled to relive the pressure. This resulted with some ill discipline from both sides with Bridge picking up a yellow card. Wold also committed infringements at the breakdown. Bridge were awarded a couple of penalties and elected to go for posts on both occasions, both were beautifully struck by Jack Johnson with the second penalty struck from just inside the half way line.

The second half saw the end of the Woodbridge pack dominance, as Southwold made player changes that saw the game move to uncontested scrums, sorely disappointing the Woodbridge forwards as they had continued to march the Wold scrum back with only 7 players. This however spurned on the forwards with Tom Jermy, James Owens and Hugo Fairbanks-Weston making some good intelligent runs coupled with an eye pleasing off loading game.

The second half saw Woodbridge playing against the wind but with the slope. A couple of tactical changes to speed up the game and use our talented back line were made. From the restart the play moved up a gear with the Woodbridge backs tearing through the Southwold defence time and time again.

An off the ball game of hand bags with a player from each side saw Luke Norman leave the field of play for violent conduct after 10 minutes of the second half. Reduced to 14 did not impact the now dominant Bridge team.

Hugo Kelleway at scrum-half was influential grabbing a brace of tries sniping at the fringes, he also  linked up well with Jack Johnson, Tom Ives, Tom Lomas to produce some direct and intelligent running lines. The ball was now being moved through the hands with the forwards in support who were onto the breakdown like a prop onto a pie, with Toby Wright and Hugo Fairbanks-Weston both outstanding. This resulted in quick ball for the backs to run at the now tiring Wold forwards.

The centre partnership was replaced with Ives picking up a knock and he was replaced by Isaac Feaveayear, Jake Hateley ankle injury was also replaced by Marcus McMyn who both produced some blistering eye catching runs.

With Wold looking utterly shattered and their defence weakened by repeated attacks, they did have a couple of break away chances which were well covered by Marcus to once again silence a home large crowd which had very little to cheer about throughput the game.

The coaches would like to praise those players that did play out of position (Felix) you happy now!

An immediate post-match tribute to the late Duncan Andrews set the seal on a good day at the office of which he would have been proud of!

Posted on 6th January 2020 by Simon Ballard — No Comments