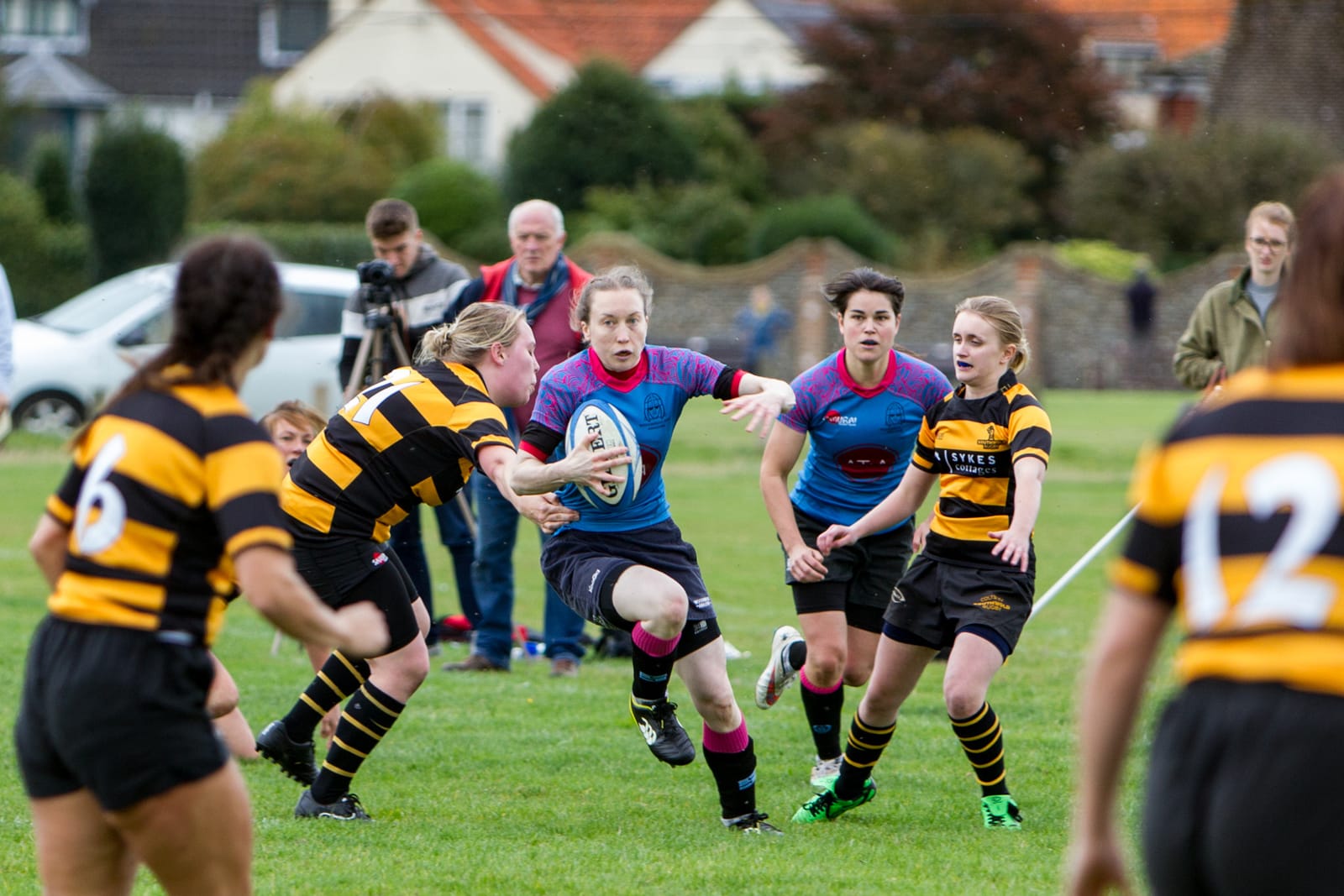 Match Report with thanks to Ian Girling

The first of the annual meetings between the Swallows and Amazons took place on a cold, blustery common in Southwold on Sunday. Travelling with just fifteen players, the travellers from Woodbridge were up against it from the outset and by the final whistle the scoreline reflected the weather; bleak.

In the early exchanges the hosts threw everything forward, the wind at their backs and lungs full of sea air. A scrum deep into the Amazons 22 was cleared, then a forward pass created another, a forward was held up over the try line, another scrum. The ball was worked wide again, only to be lost forward in the tackle, until finally the Southwold pressure told. Hooker Rianna Lees was stopped just inches short, but lock Michaela Scarle was closest in support and touched down for the opening score.

Stef Cotton kicked off and the ball held up nicely into the wind, allowing the visitors to claim possession. A lineout was forced when disaster struck. Fullback Kat Mead stayed down as a pile of bodies cleared, her shoulder had popped out and she was forced to leave the match.

That setback proved telling, as the travellers realised their task had been made much harder, while the hosts looked to take advantage of their numerical superiority.

The Welsh flanker Emel Davey-Duruk found a gap through the heart of the Amazons defence for try number two, and centre Emma Catling bounced off two tackles for a third, this time converted by Duruk. 17-0 to the hosts.

It was time for the visitors to put the brakes on their hosts and they pulled their socks up. Another excellent kick off from Cotton resulted in Woodbridge possession. Driving at their opponents, they forced an error. From a lineout the ball was punted clear, straight into the hands of Claire Brickley. She sprinted back into the Southwold 22, then fed Cotton. Alex Saunders was in support, then Anna Dewberry, who had Steph Cole outside her to receive the scoring pass for her debut try!

This altered the complexion of the contest considerably, and slowed the hosts. A fifteen minute period of calm ensued as both sides regained their composure.

Southwold scored again to extend their lead further when Lees plunged over from close range, but the Amazons reduced that lead once more when Saunders ran a tapped penalty in for her sides second score. It looked like a fightback was on when Beth Kinlan ran strongly into Southwold territory, offloading to Dewberry who again gave a scoring pass, this time to Brickley who sprinted clear.

Halftime sounded with the scoreline at 22-15 in favour of the Southwold side.

Turning around so the stiff breeze now favoured the travellers, it was hoped the 7 point difference was retrievable. Unfortunately the hosts had other ideas and used their extra player to create overlaps regularly. Fullback Annabelle Scarle scored out wide to make it a 12 point lead, and injuries began to affect both sides. While the hosts were able to replace their wounded, attention to Cotton, Saunders and the exceptional youngster Kylie Smith, playing just her second game at scrum half, held up proceedings as the gallant girls were patched up and forced to carry on.

A forward pass nullified another score out wide, but Duruk grabbed her brace shortly afterward, then flanker Nina Simone to make it 37-15.

It was gritty stuff for Woodbridge, try saving tackles from Cole and Nicky Craigie epitomised the effort. Kinlan struggled with cramp, before Duruk claimed her hattrick for a convincing 42-15 lead. The Amazons refuse to go down without a fight though, and it was Brickley that fittingly rounded out the scoring with a superb solo effort to end respectably.

One wonders what the outcome would have been with an even number of players throughout, but the Amazons live to fight another day, while the Swallows claim local bragging rights – for now.

Posted on 26th November 2019 by Simon Ballard — No Comments