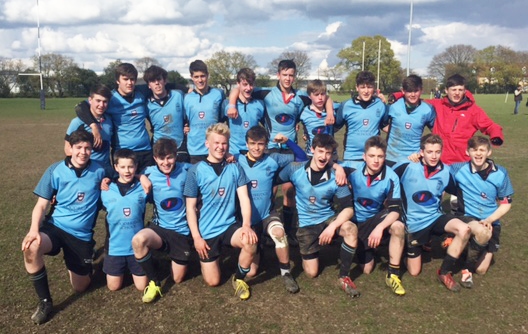 Report from Tim Owens
“Another great day for Woodbridge Under 15’s. With just 19 players, one dropping out at the last minute due to partying too hard the night before! We started our campaign against a large Holt team who took it to us in the forwards, but as soon as we shipped it wide we found space and slick handling led to a great individual run by Guy. Although of note he had support left and right if required. Converted by Elliott. And in the second half a storming run down the wing and a cut back led to another try this time by James Owens.

Next was North Walsham who came hard out of the starting blocks and took control of the game leading 12 nil at half time. With some gentle words of encouragement by management, Woodbridge upped their aggression and work rate and completely took North Walsham apart both in the tight and out wide, with a scorching try by Marcus under the posts, converted by Elliott and another forwards try from James Owens. If we had had another 30 seconds this was our game, but time was against us and a draw was secured.

Westcliff was a score-less game, but WOW wasn’t it exciting, two evenly matched teams flowing back and forth over the centre line, rarely entering the opposition 22, each team probing in attack, and defending magnificently. A draw was a fair ending to a great game. To be continued I think next season.

Last pool game was against Southend, who really are a brilliant outfit with top quality academy players in every position. 5 tries to nil to them.

So after all the Pool games were played and points tallied, Southend were in top spot, Westcliff 2nd, North Walsham 3rd, Colchester 4th and Woodbridge 5th.

Plate Semi Final – Romford was our opponent and as usual and is typical of North London teams, big and physical in the break downs, Man of this Match was Joe Lipman who played both out of position on the flank doing a very creditable job and then swapped to winger to score our winning try, converted by Elliott.

Plate Final – Brentwood another large very physical pack with direct runners in the backs, we took two tries against them in the first half, Alex and Elliott, converted both times by Elliott. But the second half the beast was awakened and Brentwood launched attack after attack leading to a great try under the posts and converted too. But time was against them and with a renewed surge from Woodbridge we reclaimed the ball and kept hold of it until the final whistle.

A long but rewarding day out, only one loss all day and that was against Southend!. Man of the tournament, a close thing, the backs were magnificent in their handling, but I can’t forgive the missed 4 on 1 opportunity. So it goes to a forward, who lead by example and showed barely controlled aggression in the tight and loose play, and played in just about every position in the pack – Well Done Brendan.”