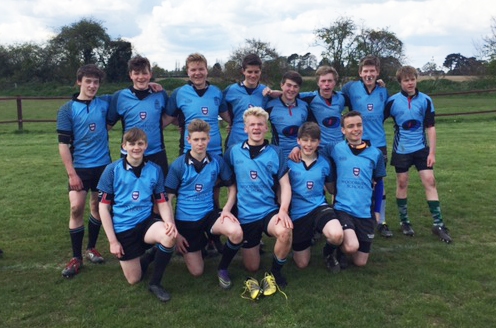 Report from Tim Owens…..Another Cup to add to Woodbridge Under 15’s Trophy Cabinet!

Elliot Man of the Tournament

The tournament started with Braintree, who very much shocked us by scoring a brilliant powerhouse of a try straight through the middle of our centres and scoring under the posts. But that was the last they had of the ball and we romped home with 5 tries scored by Marcus, Josh, Barnaby, Elliott and Jake.

Hadleigh next and as last year’s winners they were going to be a much tougher opponent and they scored the opening and closing tries, however in between we scored 5 tries from Marcus, Elliott, Travis, Marcus again, and Tom Aston.

Ipswich followed and another win, with 6 tries to 1 scored by Marcus, Josh, Charlie, Alex, Tom Aston and Alex again.

Last pool match was Eley and we won 7 tries to 1, scores by Elliott, Tom Aston, Barnaby, Marcus, Barnaby, Charlie and Will.

Semi-final time and Sudbury, big bunch of boys who played with great spirit but played a 15 a side game which as soon as we got the ball we exploited width and scored 5 tries to their 2, by Marcus, Josh, Marcus, Travis and Barnaby.

Final v Bury St Edmunds – a really tight score 7-5 to us, but we ruled the pitch for ¾ of the game, and ruined several chances of another couple of tries by not doing what we had done so well in the previous games and use the width, overlap and mismatches, that said we never really looked like losing so the score was correct on possession and territory.

Our team member voted Woodbridge “man of the tournament” goes to Sean for his amazing fitness as a forward, stealing ball and making tackles across the park, but also for his great supporting runs, leading to him scoring under the posts in the final. Well done Sean!

Lastly, for the second year running the Ipswich Rio Sevens tournament referees awarded a Woodbridge player to be their U15’s Tournament Man of the Match – which this year went to Elliott.