New to the league, Colchester IIIs travelled to Woodbridge as an unknown quantity, the Warriors not having played them before. They started hard with a penalty in the host’s 22 and moved the ball wide through full back Adam O’Leary to lanky Sam Shouksmith on the wing. Successive penalties allowed Warrior No 10 JP Hart to clear up field for his forwards, led by the experienced prop Simon Codd, to put in some threatening carries. Colchester won possession from contact and cleared although they lost their full back after a tough tackle by prop Richard Clarke. Clearly keen to get their wingers into the game Colchester worked the ball wide at every opportunity forcing Woodbridge to defend wide which they did – Nick Woodley and his fellow flanker Man-of-the-match Dan Bond working hard.

Play stayed central for a long time, both teams kicking for territory only to face a committed counter attack from the line out or missed touch. There were a lot of penalties on both sides which introduced a stop/start feel to the game and put pressure on the set pieces where the Warriors seemed to have a slight edge in the scrum but not so the line out. As the half progressed Woodbridge held the territorial balance, exploiting the blind side and looking the more threatening of the sides despite continuous penalties. First Woodley challenged the Colchester 22, then Jono Cooke off the back of the line out and scrum half Adam Plummer from the scrum. After 20 minutes Hart eventually broke the line to score wide and end the deadlock.

Woodbridge kept up the pressure Jono Cooke having some handy runs from the line out and scrum and Colchester’s hooker Graham MacCallum and second rows Stephen McManamon and Wayne Munn took every opportunity to win possession at the ruck. Hard working flanker James Fisher was also much in evidence as possession went to and fro up to the break.

The Warriors stayed hungry at the restart only to be frustrated in the line out by some dodgy throws allowing the visitors to clear. Full back Jamie Smith countered and this pattern of penalty, clear, line out and counter attack repeated itself. The only sign of the impasse being broken came from wide – first on the right wing where Warrior wing Lewis Jacobs very nearly broke through and then Taff Lloyd had a chance if the last pass had gone to hand.

After a quarter of see-saw action Woodbridge finally got the hands they’d been looking for after Woodley, John Yorke and Captain Tom Stokes started a move that must have gone through almost every team member to the patient Lewis Jacobs who finally got the try he had be threatening all half. The home team’s joy was short-lived as a penalty after the restart saw lanky centre Julian Chamberlain-Carter run in a try against scant defence.

Play reverted to the mid-field tussle that saw Woodbridge contain Colchester from levelling the score and in doing so extend their unbeaten tally to three matches. 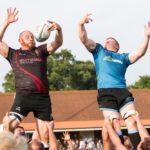 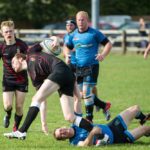 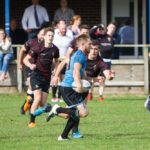 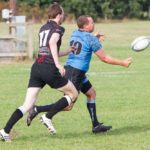 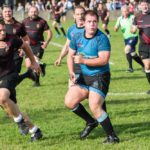 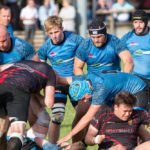 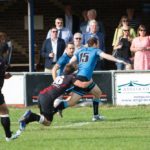 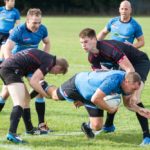 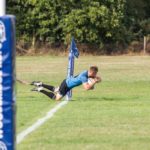 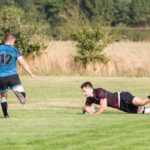 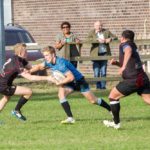 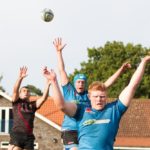 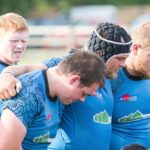 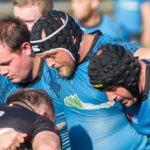 Posted on 25th September 2016 by Simon Ballard — No Comments