Swaffham started over-enthusiastically and got penalised a couple of times giving Woodbridge an early penalty three points. Woodbridge dominated possession, stole from a ruck and moved the ball wide to Herb Parsley who ran 70m and scored again within minutes. Liam Wright the Swaffham prop had a charge and second row Samuel Allot won a penalty to get them into the home 22 only to be denied by Adam Plummer the warriors scrum half and JP Hart their 10 who ran from deep. With the high ball causing some disarray in the bright sunshine it was Woodbridge that exploited this advantage with Hart chasing and gathering to score next against little defence. The set piece didn’t fare much better for the visitors as their scrum was pushed back and the kick gave them a couple of line-outs and a scrum from which Jono Cooke broke and switched to the open side where Josh Thomas stretched his legs to score. There followed a slight Swaffham resurgence starting with a missed penalty kick from Ed Jones but efforts from scrum half James Dobbins and his pack were resisted by the Warriors for Hart to clear long upfield. Woodbridge kept the initiative with Cooke, Stokes and Plummer all having a go before another scrum released ball to David Price on the wing to score. The floodgates open, Woodbridge returned to the opposition 22 and Price scored again only for Taff Lloyd to follow and Parsley to make it seven tries at half time.

The second half saw a determined effort from Swaffham with their forwards winning a penalty and defending higher up the pitch which held the home backs at bay for a while. Eventually prop Max Thompson connected with wing Karl Cason to make metres and reach the home 22. The Swaffham forwards won and held a line-out to press the line with a strong maul from which Dobbins broke to score against the flow of play and threaten a comeback. Woodbridge wasn’t having any of that however and revisited the visitors 22 where a ruck pulled the Swaffham defence to one side for Parsley to score his hat-trick from quick ball unopposed. With their scrum and line-out working well and against a tiring opponent Thomas scored again on the right wing in front of an excited home crowd. Swaffham continued to defend and occasionally Jones would get the ball to centres Jon Clarke and Adam Potter but Woodbridge’s tackling was strong and lost possession allowed the indomitable veteran John Yorke to score followed by Hart minutes later. It was a game with thirteen tries and plenty of action for the spectators if not a close-run contest. 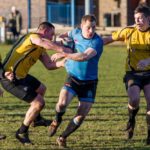 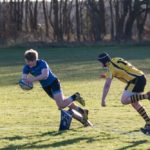 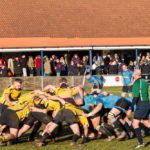 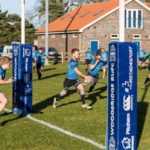 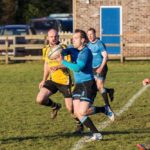 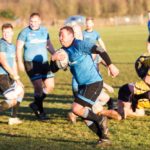 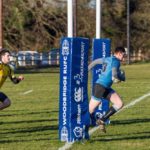 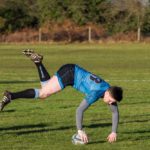 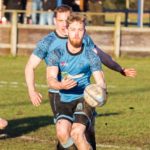 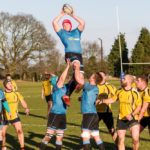 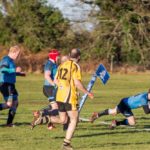 Posted on 14th January 2017 by Simon Ballard — No Comments