Last year Woodbridge (EC1) won a the Suffolk Cup – the Chedacre Cup by beating Stowmarket (London 3NE) 8-24 away. This year they faced Southwold from the same, higher, league but this time with a home advantage. The large crowd didn’t have to wait long. From a long kick off Southwold fluffed the catch, knocking the ball back towards their line and into the charging dive of flanker Dan Bond who touched down in a lightning 20 seconds.

The home faithful erupted at such a bonus start removing the threat of whitewash at least. Southwold composed themselves and set about going through some well-drilled phases. No 10 Luke Wade bombed the home corners where his forwards put in some good line-out work to secure possession. The occasional penalty gave Woodbridge relief and JP Hart a chance to thump the ball away as the ‘Wold’ countered with smooth hands out wide that encountered fast defence to shove them into touch. Scrums seemed fairly evenly matched although Southwold were penalised for pushing too soon which gave the Warriors a sortie into the Southwold danger area with Jono Cooke and Nick Woodley leading the attack before being pinged for holding on. Southwold kicked their way up field for a prolonged assault on the home line, hooker James Hall and prop Adam Smith picking and driving against Simon Codd, Dan Taylor and Billy King in defence. A penalty let Hart clear but Southwold sniffed a score and, from a scrum penalty against Woodbridge, held a line out to get quick ball first in field and then out to No 8 Jon Mayall to score.

The visitors immediately resumed their offensive, Wade repeatedly hoisting the ball up for his wings to chase favouring the right channel. Woodbridge defended another 5m threat only for Southwold to return and set up a line-out maul from which prop Smith scored to silence the home fans.

With minutes to the break Woodbridge got some possession and, after Jamie Smith missed a penalty attempt, even some territory from a great Hart kick. Luke Garnham gathered a clearance and ran back winning a scrum in the Southwold 22 from which Hart and Smith fed right wing Simon Ward who fended off defenders to score and retake the lead at 12-10.

Southwold’s scrum continued to yield penalties but despite that the balance of play remained with the visitors into the second half as their forwards worked hard into the home 22 only to get penalised again in the scrum and allow Hart to clear. Woodbridge remained under the cosh as Wade continued to pepper their 22 with high kicks and their heavy pack, Samuel Webby, Kristian Taylor and Peter Holmes tested the Warriors tackle stamina. A quick penalty and some tasty passing ended with winger Barton scoring to take a 3 point lead.

Woodbridge’s Smith missed another penalty but, undeterred they continued to bash up the middle with Captain Tom Stokes and centre Josh Thomas really challenging. The tension began to show as first Hart kicked a penalty dead and then Wade screwed up a 22 drop out and the Southwold scrum was penalised again which gave Smith a chance to level the score with 20 minutes to run. Woodbridge, lifted by a noisy home support, raised their game, exploiting Southwold penalties and yellow card to stay in the Southwold half and allow Smith to miss another penalty. Southwold lost another player after repeated infringements gave Smith one last chance to steal the win which he did as chaos followed, the Woodbridge throng going crazy at beating a higher ranked opponent for the second year running and keeping the Chadacre Cup at Hatchley Barn. 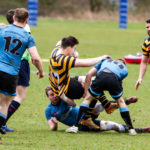 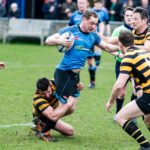 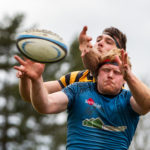 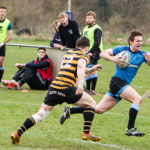 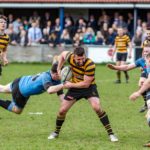 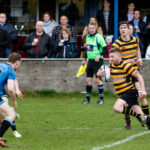 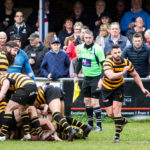 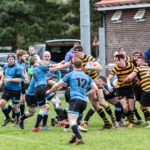 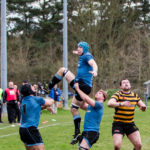 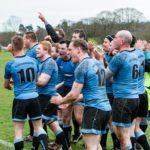